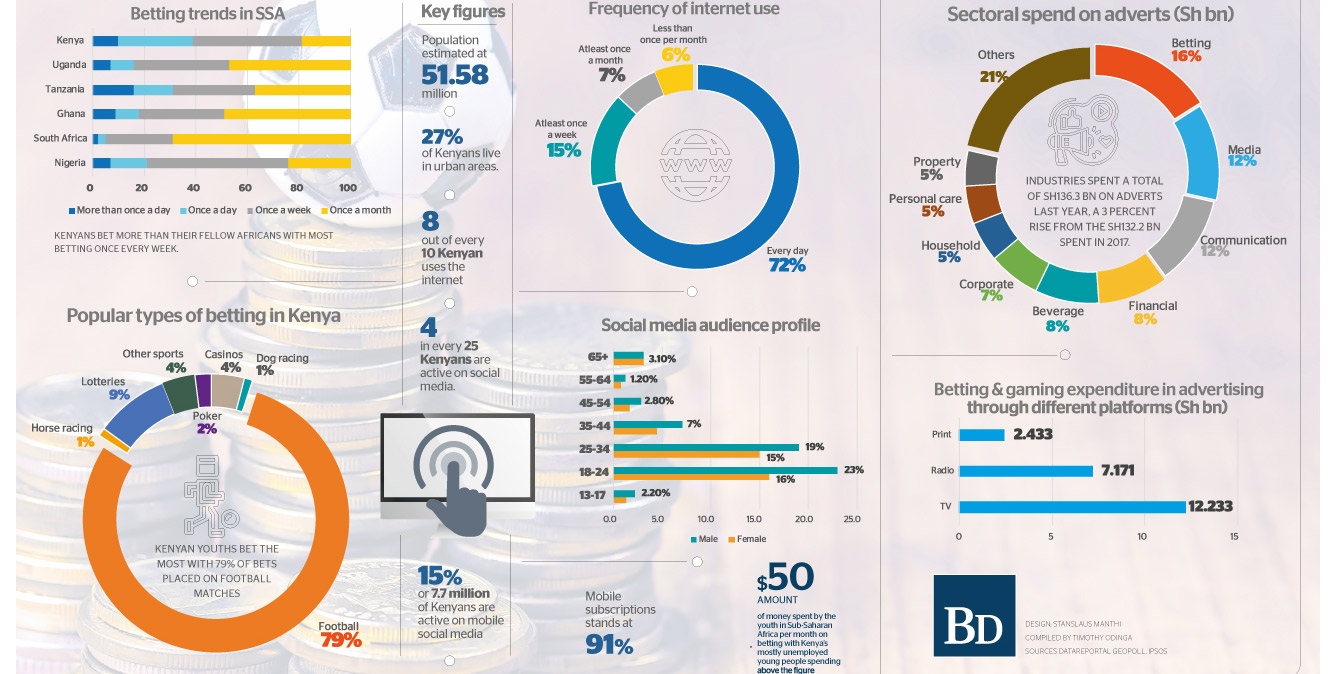 Betting and sports sites dominated Kenya’s top internet search queries in 2018, a new report showed, indicating a craze for the game in the country.

A whopping 11 of the top 20 Google search queries were directly related to betting, according to a 2019 annual report from Hootsuite and We Are Social.

SportPesa, one of the leading betting sites, came out on top of the most sought after topics. Some of the best sports betting related sites on the list include Livescore (3), Betpawa (5), Betin (7), Prediction (8), Betika (9) and SportPesa Login (10). The others are Forebet (13), Livescore CZ (17), SportPesa Livescore (19) and Games (20).

Also among the top searches were Arsenal (12) and Chelsea (16), two English Premier League teams, another sign of the growing football and gambling craze in the country.

Nation news site was also among the most searched words at number 18.

The report also found that betting sites featured prominently in the Alexa website rankings with Sportpesa.co.ke (9), Betin.co.ke (10), Betpawa.co.ke (17) and 1XBET. .co.ke (20) being among the 20 most visited sites in 2018.

According to PricewaterhouseCoopers, Kenya is the third largest gaming market after South Africa and Nigeria respectively in Africa in terms of revenue. However, in terms of participants, Kenya could be ahead of its peers in the region.

According to a 2017 Geopoll survey, Kenya had the highest number of millennials participating in sports betting in Sub-Saharan Africa (SSA).

“About 54% of young people in sub-Saharan Africa have tried gambling. Kenya has the highest number of young people who have participated in gambling or betting in the past at 76%, followed by Uganda in 57 percent. Ghana has the fewest numbers with 42%, ”said the 2017 Geopoll survey on gambling in the SSA region.

The report noted that while in other countries the frequency of betting was once a month, in Kenya it is once a week, a sign that young people may become addicted to gambling.

In addition, the Geopoll survey found that 79% of bets placed in Kenya are on football matches, making the country the leader in football betting. The majority is placed on English Premier League matches, due to its popularity in Kenya.

The rise of sports betting in Kenya is fueled by increased internet penetration and the use of smartphones.

According to the We Social Report, Kenya has an 84% internet penetration rate with around 43.33 million online users, higher than the East African Community average of 32%.

About 43 percent of the total population that owns a mobile phone owns a smartphone. Therefore, the proliferation of these devices has increased access to sports betting.

Kenya boasts a better ranking in terms of accessibility of devices and services, with a score of 63.06 out of a possible 100. Tanzania scores 41.24 and Uganda, which banned online betting this month, has 38.42.

“The cell phone has become the most practical tool for gamers. About 75 percent of those who bet do so using their mobile phones, with Kenya having the highest number of mobile uses for gambling at 96 percent, ”Geopoll said.

Despite higher internet and smartphone penetration, the 2017 Geopoll Gambling Survey found that South Africa has the lowest number of people who use mobile phones to gamble.

The growing participation in betting among young people may be the result of their love for sports and the aggressive marketing strategies of industry players.

The social impact of gambling in Kenya is not yet known. The government’s earlier efforts to introduce a 30 percent tax on gambling companies have been thwarted after intense lobbying by gamers.

The proof that online players could be destroyed is hidden in the numbers which show the popularity of betting companies and the growing number of users as well as the money spent.

According to the Geopoll report, young Kenyans spend more than the average $ 50 that other sports players spend on SSA.

“Kenya is the leader for the largest amount of money spent on gambling. Young people elsewhere spend less than $ 50 a month and most only bet once a month, ”Geopoll said.

According to research on gambling, poverty is a constant risk factor for problem gambling and mainly affects already vulnerable populations. With high unemployment rates, high gambling habits among young Kenyans could be a cry for help as many seek financial independence.